Back in March, we showcased the 2016 Nissan TITAN XD we wrapped for the 2015 SEMA Show in Las Vegas. We partnered with Nissan North America for that project, and we were thrilled when they contacted us in January of this year about another project they had in the works. For this project, we collaborated with them on not one but three of their popular crossover models that were heading to the 2016 Chicago Auto Show! With one-of-a-kind vinyl wraps and loads of other accessories, they transformed the custom-built trio into rugged “Winter Warriors.”

Because they can. That was the answer given by Nissan when asked why the company transformed the Pathfinder, Rogue, and Murano into Winter Warriors. With the popularity and record sales in 2015 and early 2016 of the three models, Nissan wanted to highlight the all-wheel-drive nature of these vehicles by transforming them into extreme weather machines. They added snow tracks, genuine Nissan accessories (think tents, all-season floor mats, and more), and a completely customized exterior. The exterior is the part where we came in!

The vehicles arrived in our shop, looking like any other Nissan crossovers on the road. We cleaned and prepped them for the installation of the wrap material.

Nothing fancy with these crossovers…yet!

We used custom frosted red chrome with chrome, satin black, and gloss white vinyl accents on the vehicles. Every inch of paint was wrapped…and beyond! We covered the roof, door handles, and mirrors on each vehicle. We also blacked out the chrome grilles, trim, and roof racks.

We started the installation with the gorgeous frosted red chrome vinyl and installed the material on all areas except the front end (hoods, fenders, and bumpers). Installation happened in phases because the vehicles had to be modified to fit the heavy-duty DOMINATOR® Tracks from American Track Truck, Inc. The vehicles would leave our facility one at a time to be fitted for the snow tracks, and then they would be returned to our shop for completion. 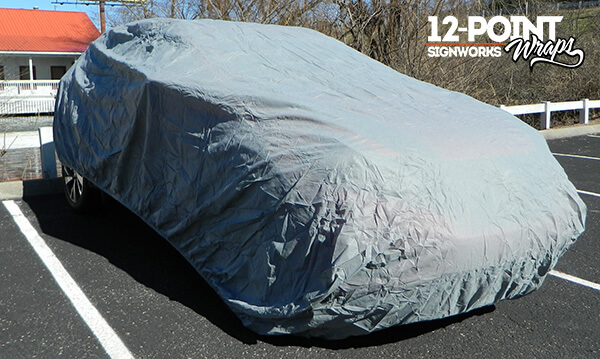 This is how we “hid” the vehicles when they weren’t inside our shop getting wrapped. We didn’t want anyone to see the Winter Warriors too soon!

Once the frosted chrome was installed, we added secondary vinyl graphics to the vehicles, including a custom cut snow track pattern, the Winter Warrior logo, and the model name on each windshield. We used red chrome to add special touches to the front and rear bumpers (excluding the Pathfinder) of the vehicles. The chrome accents against the frosted chrome wrap created a subtle yet striking effect. 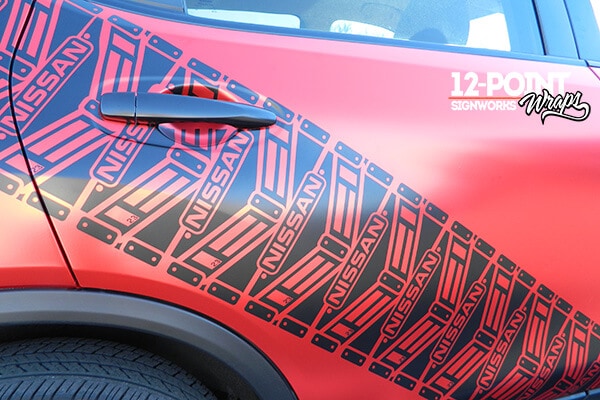 The custom snow track pattern was cut from satin black and installed on all three vehicles. 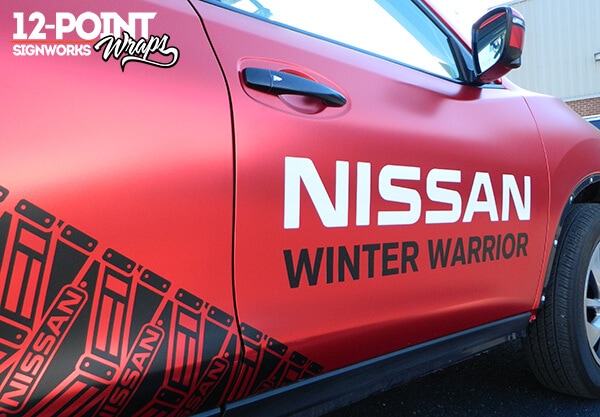 The cut gloss white vinyl and the satin black added amazing contrast against the frosted red chrome on the vehicles. 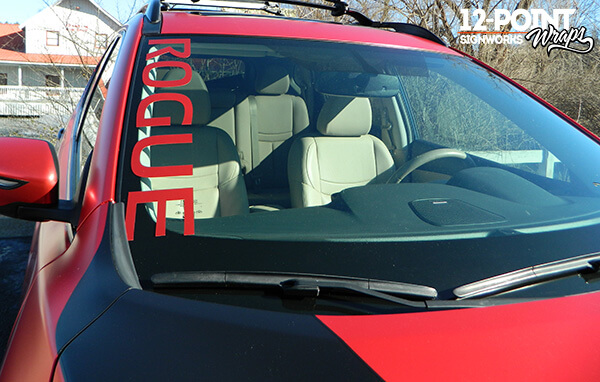 We added the model name of each vehicle on the side of the windshield. 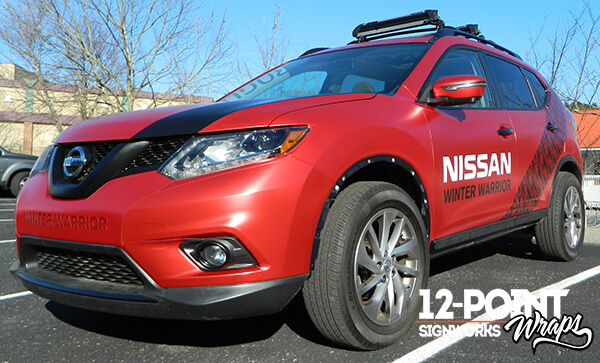 You can see the Winter Warrior logo on the front bumper of the Rogue, cut from red chrome. The effect was subtle but very attractive! Although these ended up with custom tracks, the vehicles left our shop with tires. 🙂

Prior to making it to the Chicago Auto Show, the vehicles were shipped to Wisconsin for a special photo and video shoot in – you guessed it – winter snow! The way the frosted chrome and secondary graphics reflected off of the snow is indescribable, but the video featured on Nissan’s Newsroom release gives you a little glimpse of the event.

After the shoot, the Murano and Pathfinder traveled to Chicago to be featured in the nation’s largest and longest-running auto show. Aside from standard production vehicles, the show included debut vehicles and concept vehicles. The Winter Warriors were featured in the concept category. We were lucky enough to have a team member there for the weekend to send us photos and reports on the Winter Warriors.

The Winter Warriors turned out fantastic, and we have to say that the frosted red chrome really made them truly unique. We look forward to a continued partnership with Nissan North America on these showcase vehicles. Nissan NA comes up with phenomenal ideas, and we always enjoy making them a reality!

Looking for your own warrior on the road? Let us know how we can help! Contact us at (615) 595-6564 or by clicking the link below. Feel free to leave a comment too!

Contact us for a quote on your next unique project!