We’ve been honored to work with Forklift Systems since 2013 to custom design, print and install advertising wraps for their large fleet of company vehicles. Recently, they contacted us to create a new logo for their 40th anniversary and a custom partial wrap for their 2017 Nissan TITAN truck. We’re excited to show you Forklift System’s new look!

To make the logo design fun and personalized for Forklift Systems, our designer created a pattern of forklifts, floor sweepers, and aerial lifts for the red and blue background. He also created the look of action by placing the patterns in a diagonal position. You can see the new pattern in the closeup image below.

Check out the details in this fun pattern! If you look closely, you’ll see forklifts, floor sweepers, and aerial lifts.

He also incorporated a polished metal look in the outline, the number 40 and the forklift truck icon. He gave the details dimension by adding shadows to the logo elements. Here’s a side-by-side look at the 39th and 40th anniversary logos. We love the new look!

Here are the 39th and 40th anniversary logos. Notice the pattern and dimension in the new logo!

Shortly after we completed the work on the new logo, the service manager at Forklift Systems asked us to design, print and install a new truck wrap for the company’s 2017 TITAN truck. He said he needed it to look a little different than the NV cargo high roof vans we normally wrap.

To create the custom wrap design, our graphic designer let his “creative juices” flow and came up with a bold and not-to-be-missed layout that was new and fresh. He used the same fun pattern (that he had used in the logo design) in the background. He outlined the red, white, and blue patterns in fluid, curved lines.

On both sides of the truck, our designer included the company’s wordmark: “FORKLIFT SYSTEMS, INCORPORATED” in big, bold capital letters. He added the company’s phone number and logo on the truck sides and also placed the logo on the hood. This was considered a partial wrap, because the white factory paint could still be seen on certain portions of the truck. The custom layout was designed to complement the white paint. Here’s a look at the truck with its beautiful new advertising wrap installed! 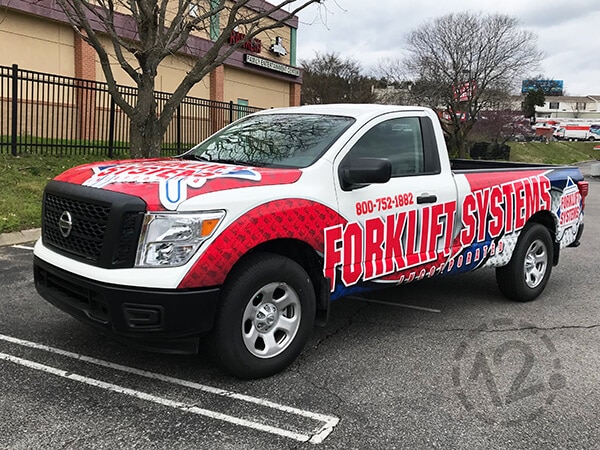 This partial wrap’s bold new look will definitely get lots of attention! Check out the fun pattern in the background!

For the tailgate, Forklift Systems decided to get creative! They provided us with a photograph of the back of the TITAN truck with its tailgate opened and items placed inside. The items included products that can be purchased from Forklift Systems. Our designer prepped the photograph to be included in the vinyl wrap and also placed the the company logo on one of the boxes. Forklift Systems has used photographs similar to this on the back of their wrapped NV cargo high roof vans for years. We love this idea! This is the type of advertising wrap that will definitely make people look twice! 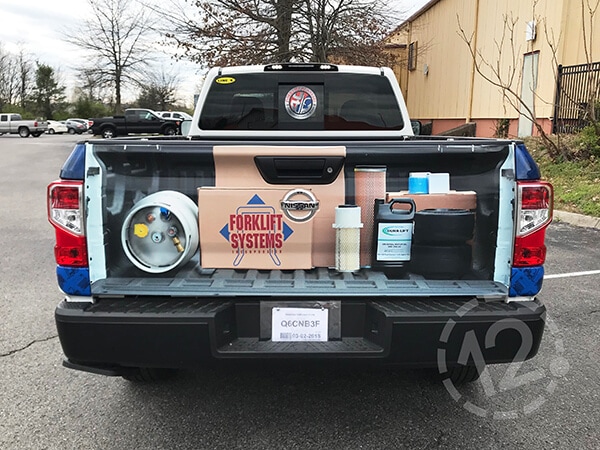 Had to look twice didn’t you?! Forklift Systems enjoys getting your attention by placing fun images like this on the back of their trucks and vans.

Also, notice the 40th anniversary logo decal on the back window of the truck in the image above. It complements the new truck wrap well, wouldn’t you agree?

As mentioned earlier, we’ve had the pleasure of working with Forklift Systems for quite a while. We have installed partial wraps (with printed perforated window vinyl) on 29 NV cargo high roof vans to date! That’s A LOT of vans!! Notice the eye-catching photograph on the back of the van in the image below. The man holding the box is actually one of their employees! 🙂

Can you believe we’ve wrapped 29 of these NV Cargo vans for Forklift Systems?!

And finally, here’s a quick look at one of the three Peterbilt trucks we’ve worked on for Forklift Systems. We installed the red and blue partial wrap on both sides of the truck and the contour cut, white vinyl letters on the rollback (the back section of the truck.) The logo was installed on the doors, and this truck was even personalized with the driver’s name. 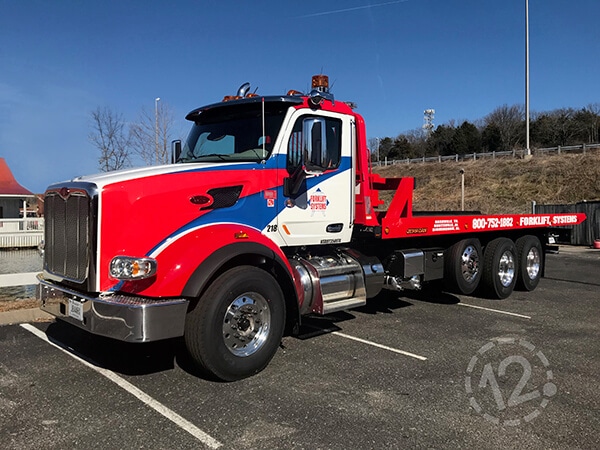 The decals and partial wrap look great on this large truck! Forklift Systems uses trucks like this Peterbilt for hauling larger equipment.

We truly enjoy working with Forklift Systems! Their fleet of vehicles continues to grow. They understand the importance and value of advertising on their company vehicles. We look forward to many more years of installing custom wraps for this great company.

Does your company own a fleet of vehicles? Or even just one car, truck or van? If yes, then you should be taking advantage of vehicle advertising. You truly cannot find a better way to spend your advertising dollars!

We are a professional vehicle wrap company based in Franklin, TN, but we serve all of Middle TN, including Nashville, Murfreesboro, Mt. Juliet, Lebanon, Hendersonville, Brentwood, Franklin, and Spring Hill. We also design, fabricate, and install custom signs, wall murals, architectural displays and more. To get your next project started, give us a call at (615) 595-6564 or click on the button below!

Click here for a free consultation and estimate on your next vehicle wrap!