Our work environment and schedules have evolved drastically thanks to the COVID-19 pandemic. Working from home for many businesses was a rarity, and dedicated office spaces were the norm. With the pandemic shutdowns, working from home became a necessity. Many still work from home, but what happens when you need to have an in-person conference or an intense project requiring all hands on deck for a few months? That’s where e|spaces come in handy. Their short-term rentals for office space and meeting rooms can rent for as little as $300 a month, making them a wise financial choice. They came to us to fabricate and install a cohesive experiential branding design for their Franklin East Main and The Nations locations.

A common theme throughout both e|spaces locations are the mural maps. For the Franklin East Main location, the map was acquired from Map Resources, digitally printed on 14’-7” x 9’ vinyl, and has “pins” dropped on various Franklin landmarks. In addition to the two e|spaces locations in Franklin, this map mural includes Franklin Square, Pinkerton Park, the Carter House and Carnton (two Civil War landmarks), and the Pilgrimage Festival site. 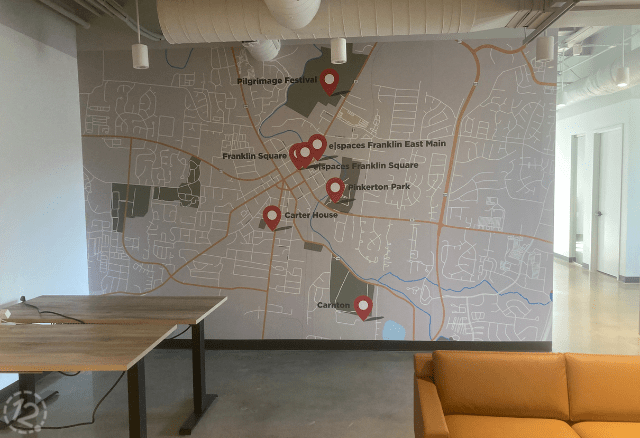 The map of Franklin, Tennessee with notable places pinned makes a neutral but notable background.

For the other mural, the beautiful black and white photograph of Franklin Square came from J Nash Photography. We digitally printed the 14’-7” x 9’ image on vinyl with the e|spaces logo. All of the e|spaces locations are noted on this mural with ½” acrylic letters that our team painted metallic gold before adhering to the photo background. 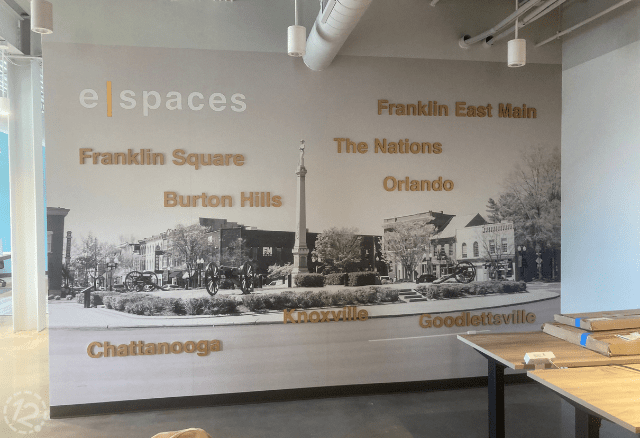 We really like how the dimensional letters for the e|spaces locations stand out against the black and white photograph.

In addition to the large murals, we fabricated two dimensional logo signs for this Franklin location. The larger of the two logo signs measures 61.75” x 13” and is fabricated with ½” thick aluminum letters in white and the yellow brand color for e|spaces. Our team made the smaller logo sign (34” x 7.2”) out of ½” thick custom-cut brass.

The dimensional letters used for the two logos help them stand out against their simple backgrounds.

The team printed the map mural for the Nations location on 236” x 120” vinyl. This design has different Nashville landmarks “pinned,” such as The Parthenon, Ryman Auditorium, and (of course) the e|spaces Nations location. 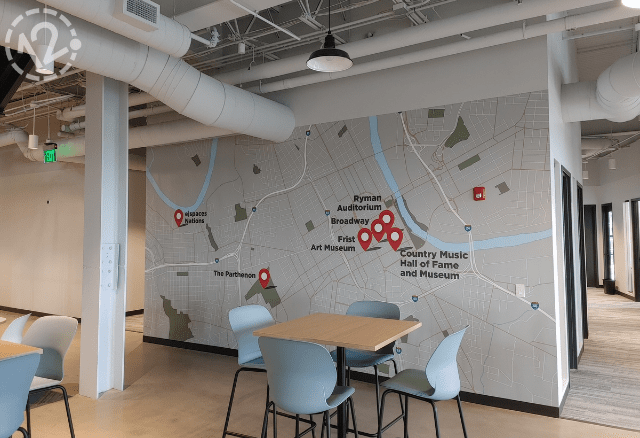 This map of Nashville has several downtown points of interest marked just like its Franklin counterpart.

Another J Nash Photography image of the Stocking 51 grain silos makes up the background for the Nations’ locations wall. Similar to the design in Franklin, this 229.75” x 120” wall graphic also identifies the cities with e|spaces locations. The mural features the e|spaces logo in the top left corner in white with their yellow brand color. 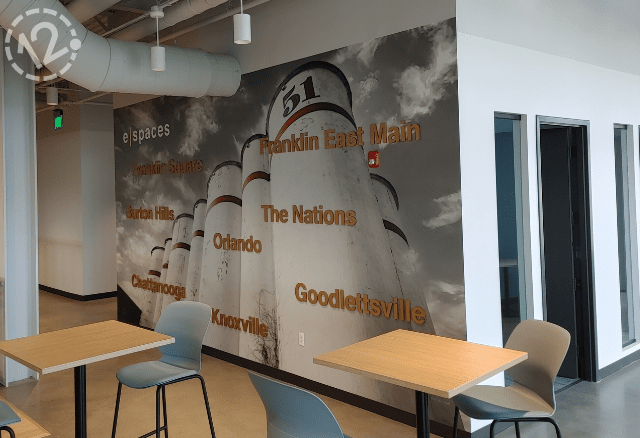 This J Nash Photography image of the Stocking 51 silos is a striking background for the dimensional lettering of the e|spaces locations. 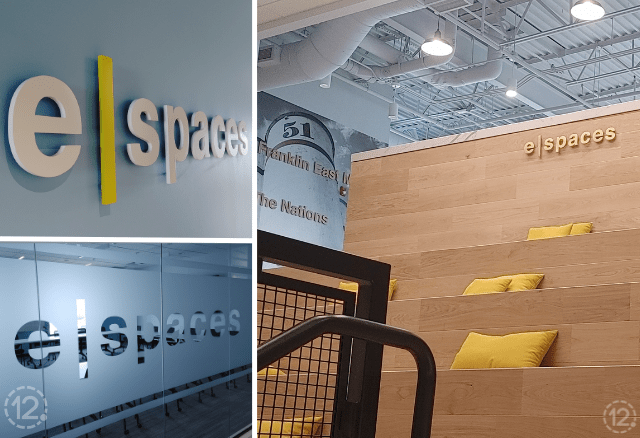 The dimensional e|spaces logos and custom privacy vinyl are great examples of the different ways to highlight your company logo.

The photograph of the iconic old silo in West Nashville features a 160’ mural by Guido Van Helten. The mural is of Lee Estes, a Nashville native who has lived in The Nations since the 1920s. 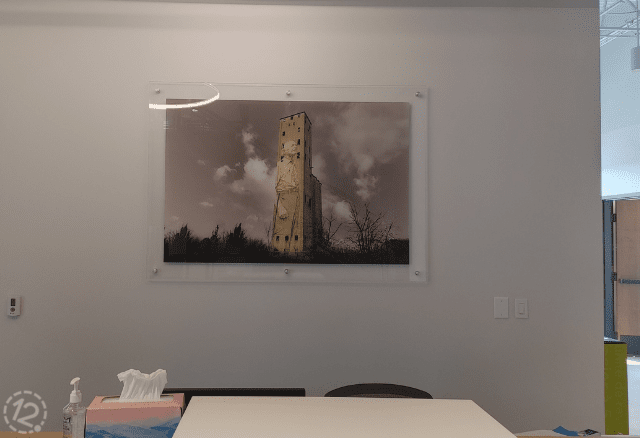 All of the photographs used in this project feature places around Middle Tennessee with a rich history.

We really enjoyed the historical thought and detail that went into creating a cohesive experiential branding design that spans both locations. If you’d like to update the graphics in your workplace, give us a call or click on the link below!

Click here for a free consultation on cohesive experiential branding!