We’ve been wanting to share the details of this project for quite some time, and the time has arrived! Last October, we were contacted by our friends at Nissan North America to assist them with a special project they had in the works. They were taking a 2016 TITAN XD, featuring a Cummins® 5.0L V8 Turbo Diesel, and transforming it into a land speed record racer. Yep! You read it correctly. We happily joined them on this adventure by fabricating and installing the custom vinyl wrap for the truck. Nicknamed “Project Triple Nickel”, we are thrilled to finally share the details of this TITAN makeover.

“Project Triple Nickel” began as a working collaboration between Cummins and Nissan North America, and they decided to reveal the modified truck at Nissan’s official booth at the 2015 Specialty Equipment Market Association (SEMA) Show in Las Vegas this past October. The nickname comes from the stock TITAN XD’s 555 pound-foot torque rating, and it also played a hand in the overall design of the custom wrap for the truck.

When we received the truck in our shop, it already had a lowered suspension, salt-flat style disc wheel covers, Mickey Thompson tires, a safety parachute, an Ultra Shield racing seat, and specially designed front air dam and bed covers. It’s hard to believe from the finished photos, but the truck was Cayenne Red when it was delivered to us. Because of the bold paint color, we made sure that we applied the material deep into any curves, cracks, or breaks in the truck lines. 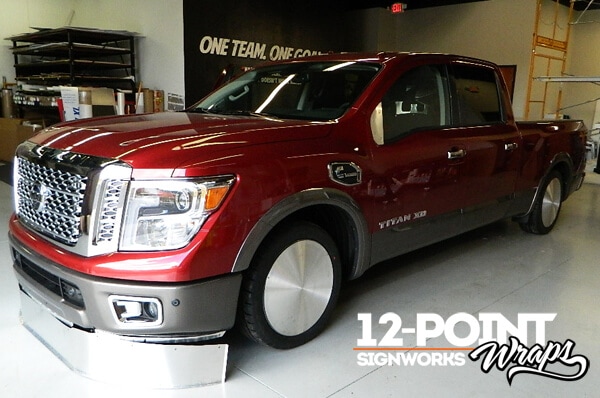 This is a photo of the 2016 Nissan TITAN XD when it arrived in our shop for the custom wrap.

Using our HP Latex 360 64″ Wide Format High Production Printer, we digitally printed the graphics on 3M 1080 Brushed Aluminum wrap vinyl. The brushed aluminum was a perfect choice to enhance the “Project Triple Nickel” design. The printed Cummins and Nissan logos and other graphics turned out better than we expected on the brushed material. 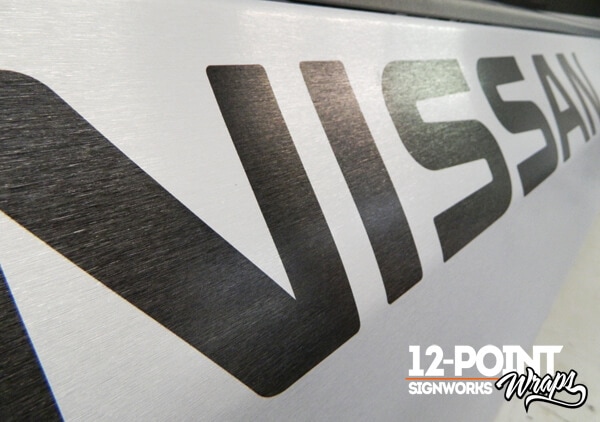 Isn’t the texture on the 3M 1080 Brushed Aluminum vinyl fantastic? The digital print made it stand out even more!

To the windows, we fabricated faux aluminum window covers that we wrapped in the brushed aluminum vinyl and the digitally printed graphics. We also wrapped the custom bed cover to complement the design. As a special touch, we highlighted the ‘TITAN’ name on the front grille by applying brushed aluminum vinyl on the existing letters. The interior of the truck even had some vinyl added to it. We love going above and beyond by working on the little details that often times go overlooked.

Here is the ‘before’ and ‘after’ of the custom bed for the 2016 Nissan TITAN XD. 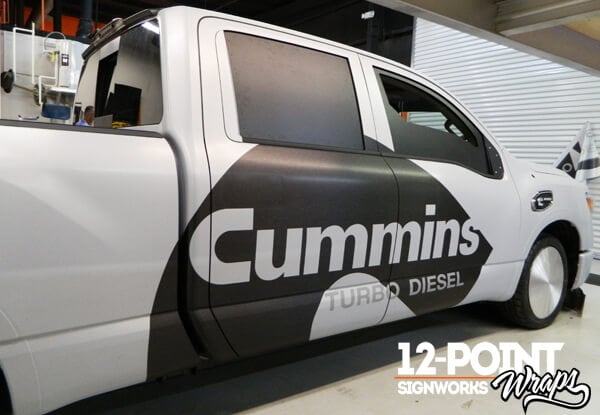 The 2016 Nissan TITAN XD custom wrap in production at our 12-Point SignWorks shop in Franklin, TN. The faux window covers are still a work in progress in this photo.

We enjoyed watching and reading the press releases about the truck during and after the 2015 SEMA Show. Since we couldn’t be there for the big reveal, we are thankful for those who were and posted photos, videos, and reviews. Diesel Power Magazine even posted the grand unveiling of the truck on their Facebook page. We were even more thrilled to see that AutoGuide.com named it the #1 truck at the 2015 SEMA Show! Well done, “Project Triple Nickel”!! Check out interviews with Steven Sanders (Marketing & Communications Manager, Cummins) and Brent Hagan (Manager, Product Planning, Nissan TITAN) here.

The transformation of the TITAN XD isn’t over yet. After the SEMA Show, it has spent the last few months having even more features installed, including a roll cage and additional safety equipment. Both Nissan North America and Cummins have land speed class record holders employed with them who are voluntarily offering support and guidance during the project. The truck is set to compete in the D/DT class (current record 191 MPH) and the FIA class A-III-9 (current record 115 MPH). We are anxious to see how it does! We at least know that it will look amazing as a participant at the salt flats.

If you have something amazing that needs a one-of-a-kind custom wrap, contact us at (615) 595-6564 or by clicking on the link below to let us know how we can help. Maybe you can beat a record somewhere.

Contact us for more info on custom vehicle wraps & graphics!