Deck the halls with lots of vinyl! Well, that’s what we do here at 12-Point SignWorks, anyway. We got to get a taste of Christmas a little early this year when we wrapped a piano and bass for Kelly Clarkson’s upcoming Christmas special, Kelly Clarkson’s Cautionary Christmas Music Tale. Now, not only will her new Christmas single be Wrapped in Red, but so will her instruments! The concert will air this Wednesday, December 11 (2013) on NBC at 10 pm EST and feature a bevy of stars including Robin Williams, Whoopi Goldberg, Blake Shelton, Trisha Yearwood, Reba McEntire, Jay Leno, Heidi Klum, Danica Patrick, among others! I’d say our work is going to be in some pretty good company, don’t you? The Christmas special is a comedic story about how Kelly is trying to use the show to become more popular, but the other stars will teach her a lesson about the true meaning of Christmas.

Although the concert won’t be until this week, we wrapped these instruments and shipped them out to Las Vegas for the taping earlier in November.

The finished products ready to be put in their cases and shipped on their way to their television debut!

We were asked to find them a “Christmas Red” vinyl to wrap a piano and bass in for the event, and after seeing some options they chose 3M 1080 vinyl in gloss “Hot Rod Red.” We’ve had experience wrapping pianos before, but this was our first bass! 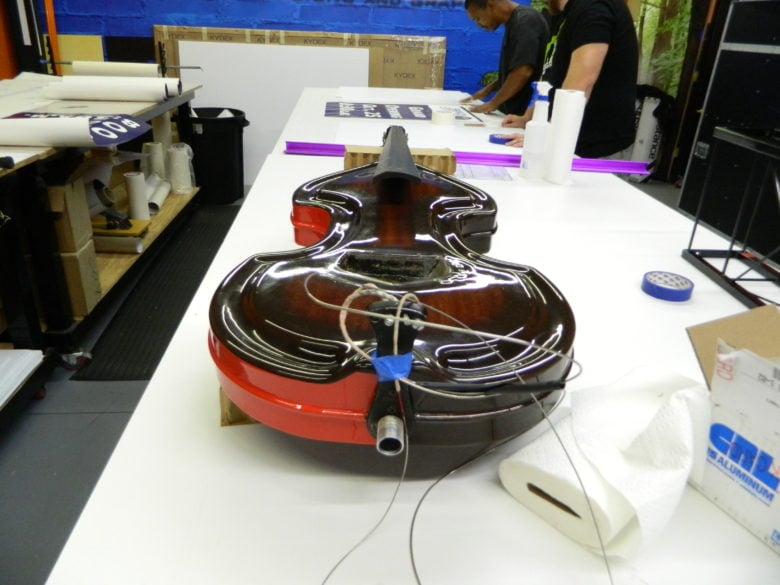 We had to take it all apart to wrap it! Don’t worry, we were able to put Humpty Dumpty together again. 🙂

It was a little challenging because of the unique shape and lack of flat surfaces, but Chuck (resident 12-Point SignWorks sign specialist and musician) and another team member were able to make it look like the bass had always been bright red. When putting vinyl on a curve (and a bass is mostly curves) the vinyl has a tendency to start pulling downward instead of going on straight so they had to use some heat and tugging to get the wrap on evenly. 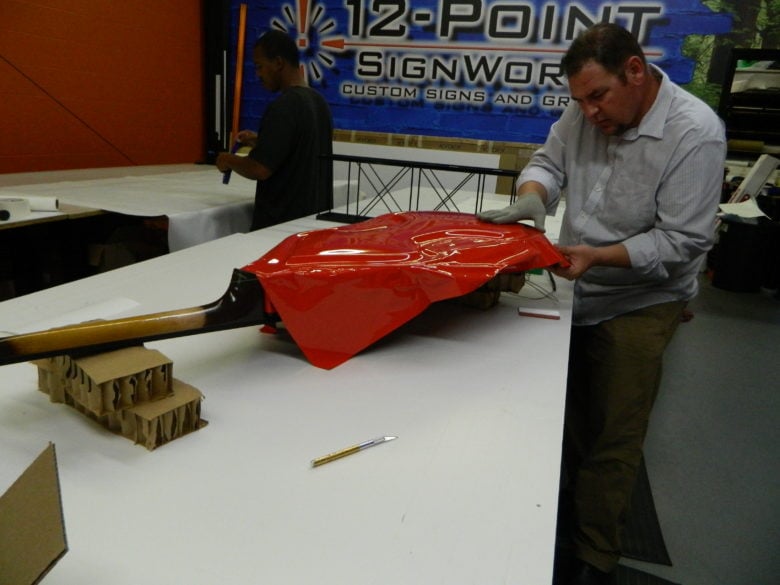 Look at the concentration, what a pro! He’s making sure the initial application goes on as smoothly as possible to minimize air bubbles and warping.

They used a tool called knifeless tape in the small, shallow ridges on the side of the bass to get it to appear seamless and smooth. Knifeless tape is tape that has a thin wire inside of it that you can place where you want to make a cut in the vinyl. Just pull the wire and it makes a thin, even slice in the vinyl that would be difficult to achieve with our normal blades—not to mention it’s safer on the instrument.

Chuck looks so happy to be squeegee-ing down the sides.

In the end the vinyl all went on really well and we had fun putting the instrument back together! 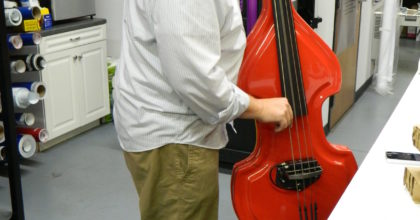 Chuck is our trained musician so he did the honors of testing out the sound of our re-assembled bass.

The piano was pretty straightforward and much easier to wrap than the bass. It’s mostly flat, smooth surfaces so it went on easily with just a little heat and a little squeegee action. 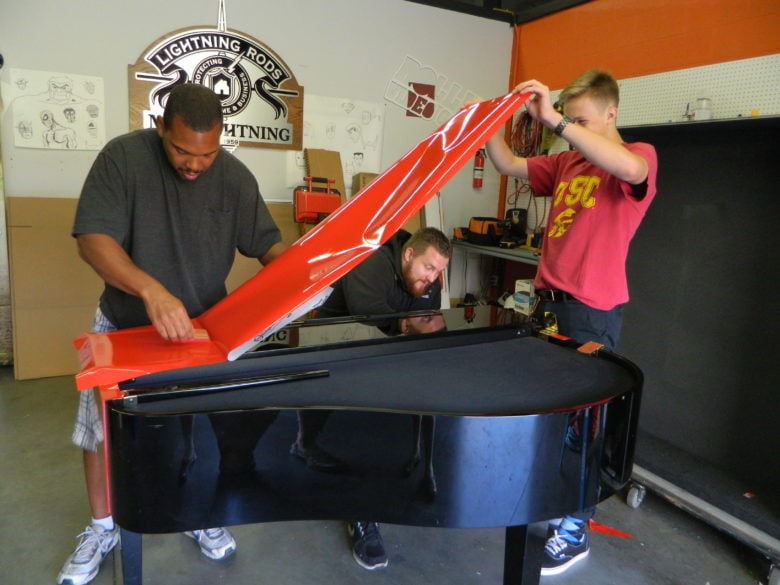 The piano is actually an electric piano so it has the versatility of a keyboard with the nice look of a classic piano. We were able to get the piano wrapped pretty quickly compared to the bass and finished it in about two days. 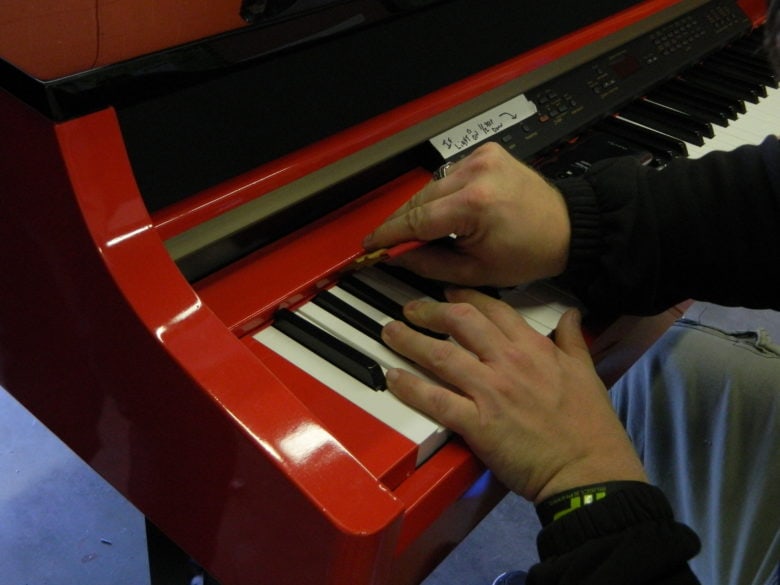 You should use a squeegee to get the smaller, more detailed areas of any wrap to apply smoothly.

Don’t forget the stool! Of course we had to wrap the stool to match the piano and bass. 🙂 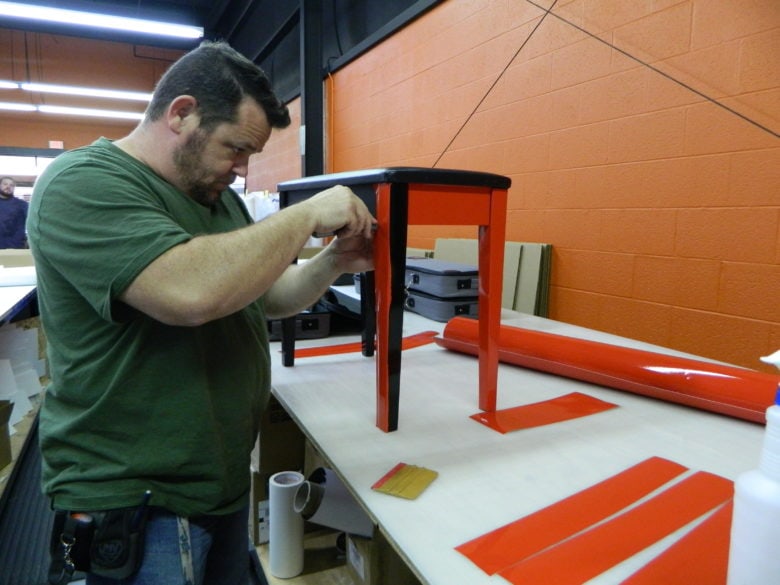 Getting down to wrap business.

We really enjoyed this project and hope to do more like it in the future. Contact us to learn about getting your instruments (or anything else, for that matter) wrapped! Call us at 615-595-6564 or click the button below to contact a representative and get a free quote on your project.

Contact us for a free estimate and consultation on an instrument wrap!